How Movement and Posture Can Help Your Children Thrive 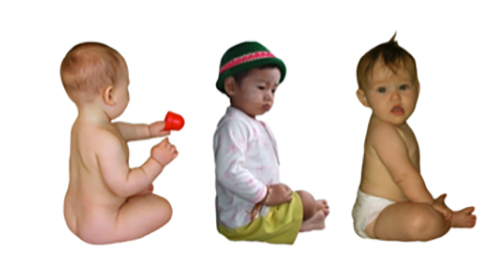 Parents and therapists worldwide are learning joyful, transformative movements that help children thrive. These special movements are both calming and stimulating and consist mainly of movements patterned after what babies do in the womb and early infancy. These automatic, innate neurodevelopmental movements—both rhythmic and primitive reflex movements—provide the foundations for sensory processing, learning, emotional-social skills, cognitive skills, proper posture and health. Best of all, these natural baby movements are highly supportive for all ages.

In the photos below the top set of babies have received sufficient neurodevelopmental movements to support proper posture, structural alignment and core strength. As a result, they are upright, alert and ready to explore their environment. The children in the bottom photos are slouched. They lack natural core strength and upright posture.

Note: on the bottom panel of photos, only the faces of the babies have been changed to protect privacy, the body positions are unaltered and shown exactly as photographed. Photographs are from Natural Posture for Pain-Free Living (2013) and Sad Dog Happy Dog: How Poor Posture Affects Your Child’s Health (2010) by Kathleen Porter.  www.naturalposturesolutions.com Used with permission.

It is easy to recognize the difference in posture and alignment between the two sets of babies. What is far less obvious is that postural strength goes hand-in-hand with brain maturity. Sadly, the children below will be more likely to have difficulties with learning and development. Why? Because brain maturity, like proper posture, is a direct result of receiving the full measure of our foundational neurodevelopmental movements in infancy. Fortunately, we can give neurodevelopmental movementsat any age and the brain matures beautifully just as it would have if the movements had been accessible in infancy. With completion of the neurodevelopmental movements, children have the foundations for posture and brain maturity. Along with better posture and strength, there is also better focus, impulse control, emotional regulation, and sensory processing. There is also more calm, greater ability to learn, better speech, and a deeper sense of ease and happiness.

Here is a real life example. Dylan is a 13 year-old boy with autism. After just one evening of neurodevelopmental movement, Dylan went to sleep calmly that evening, something he had never done before. After two weeks, Dylan’s mother wrote about the remarkable changes she witnessed: “When we brush Dylan’s teeth he usually pulls his upper lip over his teeth in a protective manner which makes it difficult to clean those front teeth. He usually screams and bites the tooth brush, now he is actually pulling his lip up to expose the teeth and there is no screaming of pain or discomfort. He has less resistance to task requests, more self control, and less reactive behavior”

In another case Grady, a six-year old boy, had anxiety and compulsive nail biting so severe his fingertips were raw and bloody. His mother did rhythmic neurodevelopmental movements with Grady at night while he slept and in small amounts during the daytime. The movements had a profound calming effect and very soon Grady stopped biting his nails. Within 10 days his fingertips healed and though they were scarred, they were no longer bleeding and raw.

The movements work for sensitive struggling learners as well as for gifted and advanced learners.

What are neurodevelopmental movements?

For many reasons in our modern society, these natural movements can be interrupted or hindered at the very beginning of life, leaving many children unable to complete their proper development. To varying degrees, these children suffer from an underdeveloped, immature neuro-sensory-motor system.

An immature neuro-sensory-motor system can manifest in many ways. For some children sitting still, focusing, and learning are difficult. Other children experience anxiety, stress, or depression throughout their daily lives. Others feel frustration and exhaustion because of the extra effort required to do daily tasks in an un-integrated state. Some children have behavior challenges—excessive defiance, phobias and compulsive tendencies are common. Many children have trouble falling to sleep and many do not sleep restfully. Huge numbers of children have mild to severe sensory processing disorders.

How do neurodevelopmental movements work?

According to Harald Blomberg, MD and Moira Dempsey, authors of the book, Movements That Heal, doing rhythmic neurodevelopmental movements activates critical links in the brain. This whole-brain linking creates optimal functioning and accounts for why the movements are so helpful in overcoming a large variety of conditions.

For over 40 years research studies* have shown the connection between learning delays and un-integrated neurodevelopmental movements, also called primitive reflexes or primary movements. Movement disorders are now considered a defining characteristic of Autism Spectrum Disorders. Clinical evidence and research also shows that when we give the neurodevelopmental movements to children with challenges, their learning improves along with their self-esteem and social life.

Parents as well as professionals can use neurodevelopmental movements to help our children overcome challenges and better access their gifts.

Check out Sonia’s courses where she teaches parents and professionals how to use this exciting technique!

—“Rethinking autism: Implications of sensory and movement differences for understanding and support”, Frontiers in Integrative Neuroscience, 6:124, 2012

—“Motor coordination in autism spectrum disorders: a synthesis and meta-analysis. Journal of Autism and Developmental Disorders, 40, 1227–1240, 2010.

—Attention, Balance, and Coordination: The ABC of Learning Success, Wiley-Blackwell, 2009.

—Reflexes, Learning and Behavior, A Window Into the Child’s Mind,

—“The effects of the Primary Movement programme on the academic performance of children attending ordinary primary school,” Journal of Research in Special Education Needs, 5(3), 101–11, 2005.

with P.G. Hepper and G. Mulhern

—“The effect of social disadvantage on motor development in young children: A comparative study,”Journal of Child Psychology and Psychiatry, 8(12), 1214–22, 2007.

—“Prevalence of persistent primary reflexes and motor problems in children with reading difficulties,”Dyslexia, 10(4), 316–338, 2004.